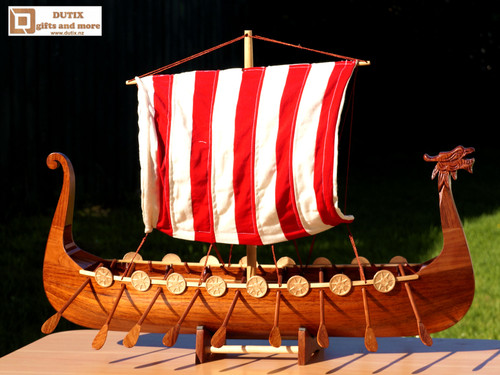 Viking boats are uniquely designed sailing boats built by Vikings in the Viking era from late 8th to late 11th century. This type of boat is quite diverse, depending on the purpose of use, not only for their military power but also for trade and exploration. Viking boats were often found in the Baltic Sea from far north Scandinavia, Iceland, Faroe Islands, Greenland, Newfoundland to far south Mediterranean and Black Sea.

The Viking wooden boat model is 100% handmade from natural wood to such details that can be called a small version replica of a real actual Viking boat. No Kits are used

The bow of the boat is carved with dragon head. The deck is meticulously composed of 2 different wood color. Two sides are equipped with 10 shields and 9 oars. Set of sails are made of burlap with white and red tones in accordance with the actual Viking boat.